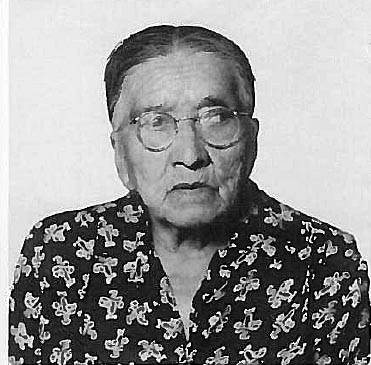 Nicolasa Cuevas was our great-grandmother, Mother to abuela Diega Loredo. She was known affectionately as Mama Gasa ever since I could remember but do not know how she got her nickname.

Mama Gasa was born on or about 1863. One or two records indicate she was born in 1864, another in 1865. Her father was Zeferino Cuevas and her  mother, Maria Nabor Reyes. From what I found, the Cuevas clan was from the rancho, Lagunillas, not  too far from the Rincón. Maria Reyes was also from Lagunillas.

On February 6th, 1886, Mama Gasa married Norberto Loredo in Villa Iturbide. This was the name used for the town that is now known as Villa de Hidalgo. Norberto was born approximately 1850 although no official document was found for his birth date, this is only from immigration documents.

Her first child, Lorenza, was born on September 26th, 1887, and baptized in Armadillo de los Infante, which is fairly close to the Rincón, although maybe not that close in 1887 if traveling by horse.

Not much is found for Mama Gasa until 1917 when the entire clan traveled to Laredo, Texas. She along with Norberto, Abuelo Bartolo, Abuela Diega, my Mom and Teofilo all traveling together.

After that, the next document found for Mama Gasa is a census from 1940 when she was living with her son-in-law, Lorenzo, (Tio Lencho), in Long Beach,  who had married Lorenza, and his family, Frank, Ralph and Cruz. Norberto is not living at this time, he passed away in Texas possibly around 1920 or 1935, but no records can be found to confirm date of death. He was about 13 years older when they were married. And Lorenza had also passed away at the time of this census.

Zeferino Cuevas was born 1837 and passed away 1917. Mama Gasa’s Mom, Maria Navor-Reyes, was born 1842, but date of death unknown. Mama Gasa had a sister, Placida, born 1870 in Armadillo de los Infante, and passed away 1912. Placida married Anastacio Vega in 1889 in Iturbide. She also had twin brothers, Macedonio and Regino, born 1872 in Villa de Hidalgo.

Our great grandfather, Norberto Loredo was born on either 1848 or 1850 at Armadillo de los Infante, San Luis Potosí. He passed away in 1935 or maybe 1920, Rockdale, Texas. This is what the records say that were found on him, but as of May of 2019, the county of Milam, Texas has been unable to locate his burial site or record of his death. He may have died at an earlier date but the county records department personnel were unable to find him using an older date of death.

His father was Eugenio Loredo, and his mother was Casilda Rosales. Eugenio was born in 1818 and Casilda was born 1823. They were married at Villa Iturbide in 1837, she was 14 at the time and he was 19 years of age

On another record, it says the household members at the time were Gumecinda and Celestino Castillo, Porfirio’s parents, and Margarito and Irenea Castillo, grandfather Bartolo’s parents, besides Norberto and Nicolasa